2. Payment method: PayPal (If you don’t have a PayPal account, you can pay with your debit/credit card - powered by Paypal).

You remember, right? Leonardo DiCaprio playing me, Jordan Belfort, in The Wolf of Wall Street. And power selling penny stocks on the phone while the rest of the sales team stood by in silent awe.

That’s an example of the perfect sale – where everything almost magically falls into place and you chalk up another winner.

Truth: that scene was not part of a Hollywood script.

That was a small snippet of the actual script I wrote for my sales team after they crashed and burned trying to sell “out of their league.”

In real life, that was just an amazing day.

These guys barely made it out of high school and they were attempting to close the wealthiest and most sophisticated prospects on the planet.

That carefully written script turned a sales disaster into a commission bonanza.

And it proved once and for all that I could take anyone, from any background or circumstance, and turn that person into a world class closer.

Yeah, I got caught up in that whole greed thing along the way, but that was my own youthful foolishness.

That sales script, however, was rock solid. And very little of it made it into the movie because it was just too valuable to reveal in its entirety.

How to Craft Your Own  Million Dollar Sales Scripts

Now don’t think for a minute that because my heart is in sales that I’m being sensational here.

In terms of today’s dollar, no one on my sales team ever earned less than a million dollars a year.

The best of my people were taking home $4 million to $5 million – for reciting words on a piece of paper!

You can do the same! I’m offering to teach you the right words to say, when to say them, in what order to say them and the precise emotion that will underpin each word that comes out of your mouth.

Catch my drift here? There is an exact science behind the success of the sales scripts I write. Every syllable, every comma, every intonation gets carefully evaluated and adjusted. I leave nothing to chance.

The end result is a perfectly balanced, rhythmic, almost hypnotic sales script that keeps you in control while still encouraging productive dialogue –turning skeptics into believers, prospects into lifelong customers.

So a million dollar sales script means exactly that. No fluff.

No smoke and mirrors. Just amazing results! And because creating great scripts is more science than art, it’s both teachable and duplicatable. That means you can do exactly what I’ve done and more.

Yes! You Need a Script!

Don’t fall for the misguided belief that you should just “wing it” and say whatever comes to mind as if this will make the conversation more “friendly.” This is a grave misconception that will cost you sales.

Do you think they want to stop what they’re doing just to have a friendly conversation with a total stranger?

Or do you think they want proof right up front that you’re on the ball, that have something of value to offer them and that you’re not going to waste their time! I’ll show you how to build a script that will help you gain instant rapport with any prospect.

That means you’ll be a friendly conversationalist and a force to be reckoned with – at the same time!

This Octane Boost Will Make You Unstoppable

When I commit, I go all balls out.  I encouraged the same from my sales team and I made sure they had every advantage when dealing with prospects. I will not give you any less.

That’s why I’m including the essential elements of The Straight Line Persuasion System in your script-building course.

While Script Builder Technology gives you the mechanics of script writing, The Straight Line Persuasion System gives you the psychology of selling.

The two are really powerful on their own, but when they’re combined, the results can be explosive.

I have included everything that relates directly to sales scripts.

And I’ve weaved this Straight Line Technology into the Script Builder Technology so you get one seamless, easy-to-grasp formula.

There’s More to a Script Than Words!

Discover the 91% of Communication

You May Be Missing Out On

This is such a crucial part of the success behind my Straight Line Persuasion System that I had to share it with you as part of Script Builder Technology.

If your past scripts have sounded robotic or wooden, it’s likely that no one has ever taught you the effective use of tonality and body language. As a result you may have found it difficult to build rapport.

That’s because only 9% of human communication is words. The other 91% is tonality and body language. That’s what gives our words emotional impact.

Almost as if I were your acting and voice coach, I’ll show you how to express each word with the correct tonality.

You’ll Learn All This Too!

No need to force your prospect into submission and no need to try “every close in the book.” Once you see the model script in action, you’ll understand how prospects will eagerly follow your lead toward the close.

Script Builder technology includes a 66-page PDF workbook with detailed instructions on how to compose your winning script.

We’ll examine each element – The Open, The Body, The Close and The Rebuttal – using a complete model script. You can adapt this script to your specific needs or use it as a guide to build your own script from scratch. 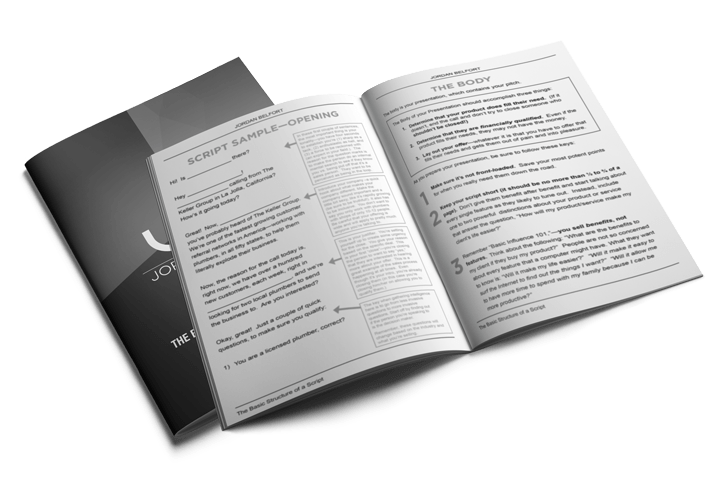 I’ll take you on a guided tour of the entire script building process, from the Opening, to the Main Body or the Presentation, right through to the Close.

You’ll discover why scripts must be an integral part of your sales strategy to how my script building technology produces more consistent winners.

Then we dig deep into the structure of sales scripts, starting with the three critical elements of the opening, the ultra-smooth transition into the presentation and the use of specific language and tonal patterns to close the sale.

And if you’re concerned about objections, you’ll discover a far better way to handle them than the usual whac-a-mole approach – beat the objection down as soon as it leaves your prospect’s lips. Who’s in control of the conversation when you do that?

I’ll show you how to set aside the objection, again, using specific language and tonal patterns and answer the objection when you decide the time is right.

Finally, I share actual footage of a corporate training session in which we rehearse and edit, on the fly, a new cold call script.

Thank You For Shopping With Us